Despite overall retail sales dropping 5.7% in April, cannabis sales saw a 3.89% increase as the third wave of COVID-19 rolled across the country. Sales decreased in nine out of eleven subsectors, according to Statistics Canada, but luckily cannabis was not one of them. Some provinces did see a mild decrease in sales in April, despite cannabis’ annual 4/20 celebrations, however, many saw slight increases, and some grew enough to make up for the decline, bumping the national total up to $309.7 million.

As usual, Ontario took home the biggest slice of the pie, its 675 retailers earning $108.1 million in sales, 4.6% more than the previous month. Toronto remains the city with the highest sales as well, bringing in $41.5 million from 168 stores. Alberta and Quebec held steady at second and third place, sales increasing by barely 1%, earning $58.8 million and $48.7 million, respectively.

The highest increase, however, was seen in British Columbia. As more municipalities opted in for cannabis retail and more stores opened up, the West Coast saw a 13.86% increase in sales in April, going from $41.2 million in March to $46.9 million. Vancouver saw a huge spike as well, with sales increasing almost 33% from $12.5 million to $16.6 million.

When it comes to average monthly sales per store, the results are more of a mixed bag.

Quebec, with its stationary store count and increasing sales, saw an increase in province-wide sales per store, but surprisingly not much in the cities. Overall, stores in Quebec bring in an average of $717,367.65 per month, but a whopping $3.5 million each in Montreal, down from $3.9 million the month before.

Across the Prairies, modest growth was reported, but Alberta retailers continue to take a hit to their average monthly sales as more stores open. Monthly sales only changed by 0.04% between March and April, but the province’s store count grew to 618, making the average only $95,236.25. Calgary, the city many industry analysts are worried about, added seven new stores and sales only grew 0.78%, bringing down the average from $107,128 to $103,097. Edmonton was only marginally better, adding five new stores, but maintaining an average of $157,331, still down quite a bit from $165,378 the month before.

Even with lockdowns and restrictions, the producers, retailers, and consumers still manage to help the industry grow month after month. 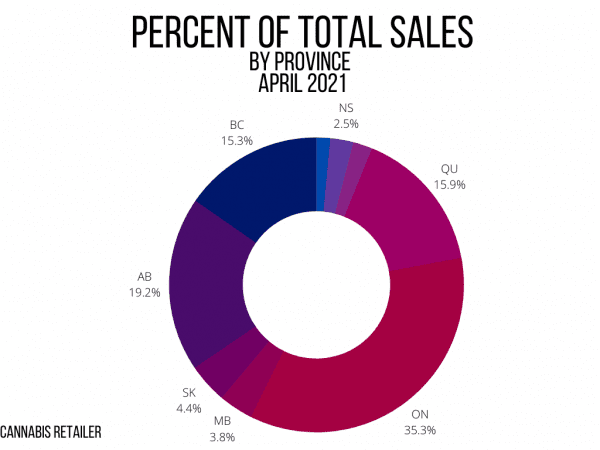