In the 2020-2021 fiscal year, the BC Liquor Distribution Branch (LDB) bought $91.9 million worth of cannabis from its top five suppliers alone—increasing to $129.1 million for the top ten. During the previous fiscal year, sales totalled $135.9 million, meaning that the equivalent of 94.9% of last years’ sales went to 10% of suppliers.

This is no surprise, considering that during the year, the LDB went from 50 suppliers to 99 to serve the additional 127 retailers and 10 BC Cannabis Stores (BCCS).

According to the 2020-2021 Annual Service Plan Report released by the LDB, cannabis sales grew 140% between March 2020 and March 2021, increasing from $135.9 million to $327.2 million, as access to legal cannabis increased. By the end of March this year, the province counted 305 private retailers and 25 government-run BCCS, as well as its online counterpart, and the addition of 49 suppliers bumped up the number of unique products from 591 to 1,062.

Despite pandemic-related challenges preventing the LDB from opening as many BC Cannabis Stores as it would have liked, it still added 10 new stores, increasing annual transactions at BCCS from 632,000 to 1.1 million and grew the average transaction size from $57.31 to $62.79. Unfortunately, according to the report BCCS sales per square foot decreased from $781 to $709, and BCCS’s portion of sales is being steadily overtaken by private retailers, now split 80/20 in favour of private stores.

The organization’s sales and profits are growing, but who does the LDB buy from? Well, it’s likely not a surprise.

According to the LDB’s 2020-2021 Statement of Financial Information, it purchased $24.5 million worth of cannabis from Aurora Cannabis, its highest value supplier. Aurora’s brands include San Rafael, Whistler Cannabis Co., and Daily Special.

Tweed comes in second place, having received a total of $22.5 million worth of orders. According to the Service Plan Report, the average price per gram of dried flower declined by 24% over the year due to customers’ interest in larger format offerings, so Tweed and Daily Special’s 28-gram formats could be pulling in more sales. Coming in third is Aphria, with the LDB buying $18.3 million worth of products for brands like Good Supply, B!NGO, Solei, RIFF, and Broken Coast. 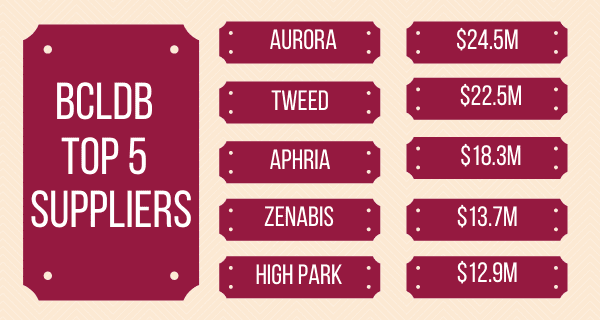 While the top five are not entirely surprising—they are huge corporations with multiple brands to choose from—it serves as an interesting case study on the industry at large.