As the calendar rolls over the third anniversary of cannabis legalization, the Cannabis Council of Canada (C3) released its annual legalization report card. Out of 11 criteria, C3 gave provincial and federal governments an overall grade of “D”, saying that we are certainly not done yet.

In collaboration with Cannabis Amnesty, Medical Cannabis Canada, NORML, and the rest of the cannabis community, C3 is calling on governments to adopt the reforms needed to fulfill the health, social, and economic promise of legalization, which they say has not been done so far. With four failing grades and three more nearly failing grades, it’s clear that there are several reforms to be done.

While C3 is an organization of Canada’s licensed producers and processors, these changes will make things easier on everyone, retailers and consumers included.

Four out of eleven criteria received an “F” grade from C3, particularly where the product meets the consumer. Combatting the illicit market and consumer awareness and education seem to be the largest failing, according to the report card.

“The illicit market accounts for at least 50% of all cannabis sales in Canada. This means that $4 billion dollars per year of cannabis are diverted to the illicit market, costing hundreds of millions of tax dollars and lost opportunities for communities and individuals in the legal industry,” reads the report.

It goes on to say that governments have left legal license holders, and in turn retailers, on their own when it comes to combatting the illicit market. Suffice it to say, it hasn’t been going well, particularly when illicit actors don’t have to play by the same marketing and promotions rules, health standards, or THC limits as the legal market does.

Not only that, but the product mark-up in the legal industry, due to exorbitant “transactional fees”, the 2.3% annual regulatory fee, and $1 per gram excise tax that producers have to pay, plus mark-ups from processors and provincial distributors, make it nearly impossible to compete with the illicit market on price and quality, often having to pick one. Unfortunately, due to the lack of consumer knowledge the report cites, consumers are often only interested in the highest potency product for the lowest price, and in their search for this product, sometimes can’t even tell which businesses are regulated and which ones are not. 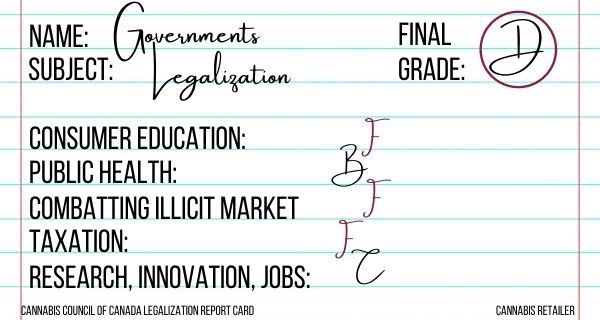 Despite major complaints, provincial and federal governments did receive passing grades in some areas.

First and foremost, C3 acknowledged that youth cannabis use has not increased in the three years cannabis has been legal, and neither has the use of cannabis among those aged 18-24. This is good news, however, the government’s failure to educate Canadians properly on cannabis itself, as well as the risks of consuming illicit cannabis, kept it from getting an “A” in “Protecting Public Health” and “Keeping Cannabis Out of Hands of Youth”.

“Sustainability” and “Research, Jobs, and Innovation” received “C” grades. While the report applauds the thousands of jobs created in the legal cannabis industry, it cites the regulatory burdens imposed in both these areas as the reason for their average grades. A few changes to packaging rules, particularly around flower, could massively decrease the amount of package waste for consumers, and treating cannabis like the agricultural product that it is, rather than a pharmaceutical one, could make it easier to study and break the stigma associated with it.

As an industry, cannabis is still very young and has a long way to go before things that seem common sense are commonplace, but we can’t forget to keep advocating along the way.