High Tide, one of the leading cannabis retail brands in Canada, has quite a few plates spinning, but it appears to be working out. In recently released financial highlights, High Tide reported that in the third quarter of 2021, revenue increased by 99%, from $24.1 million last year to $48.1 million. On top of that, the company has made several exciting announcements in the last few weeks.

In its Q3 2021 results, High Tide’s profit increased along with its revenue. In the three months ended July 31, 2021, the company’s gross profit increased 75% to $16.7 million, and while its profit margin and adjusted EBITDA decreased, High Tide claims this is mostly due to expenses and fees related to the uplisting of its stock to Nasdaq, as well as staffing and building out newly acquired companies. Since the November 2020 acquisition of META Growth Corp. High Tide has been scooping up brands left and right, including FABCBD, online retailer DankStop, and a handful of retail stores in Saskatchewan.

“Since our inception over a decade ago, there has never been a more opportunistic time for our company’s growth. Over the past year, we have been making strategic moves to successfully advance our rising portfolio of companies,” said High Tide’s CEO and President Raj Grover in a press release. “We believe we can continue to build upon this momentum and capture a sizeable share of the cannabis market globally. I’m proud of our team’s efforts this quarter which resulted in revenue increasing once again by 99% over last year and 18% sequentially, despite market disruptions due to pandemic-related lockdowns and a very aggressive pricing strategy adopted by some value players.”

Speaking of value players, High Tide is noticing the writing on the wall and trying its hand at a value brand.

“Cannabis Chop Club”, a brand new retail banner for the company, will be a cannabis retail value outlet, with a simple and approachable interior aesthetic that showcases the “warehouse vibe along with a club membership feel”. The brand’s release says that the Cannabis Chop Club stores will offer exclusive deals and wholesale prices for “Chop Club” members. High Tide is proud of its loyalty program membership, boasting a 45% increase in sign-ups during the quarter, and likely hopes to see the same adoption with its new brand.

Despite the warehouse feel, Cannabis Chop Club stores will end up being smaller than the overage Canna Cabana location—the new stores will likely have an average retail footprint of 1,000 to 1,200 square feet compared to 1,500 to 2,000 square feet and cost less than half as much as a Canna Cabana store to build, which can cost up to $350,000. 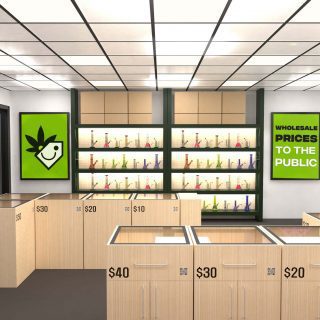 “Over the past six months, it has become clear to us that value-focused customers represent a very meaningful consumer segment in the Canadian cannabis retail landscape. Our upcoming move to specifically service the value segment is designed to increase market share and lure customers away from the illicit market which, although declining, still represents a significant share of total cannabis sales nationally,” said Grover. “Our strong data analytics capability has allowed us to pinpoint competitive and value-sensitive markets where the new Cannabis Chop Club model can thrive and compete with the aggressive pricing strategies that have been adopted by certain competitors.

In the meantime, High Tide has brought its store count up to 94 after announcing its new META Cannabis Co. store in Selkirk, Manitoba, as well as seven new stores across Alberta, Saskatchewan, and Ontario.