2021 marked the third anniversary of cannabis legalization in Canada. Normally, the third anniversary isn’t the one that’s celebrated, but it’s a good time to take stock of the last three years and see if any areas need to be improved—and that’s exactly what Health Canada is doing with Canada’s Cannabis Regulations.

At the inception of Bill C-45, or the Cannabis Act, it was written into the bill that the third anniversary would trigger a review. Now that the time has come, what are industry lobbyists hoping will come of it?

While Health Canada and the Cannabis Act mainly govern licensed producers and the products they create, there are still a few issues and potential changes coming down the pipeline that retailers need to know.

The buzz for cannabis health products has been growing as producers perfect their product formulations and bring them to market. Wellness products such as bath bombs, skincare collections, and creams and balms meant for nourishing the skin as much as soothing inflammation or pain are hitting the shelves all over Canada, leaving some wondering why these non-psychoactive products have to be kept behind the counter.

Luckily, industry insiders say that talks about delisting these products are already happening. We could see non-psychoactive cannabinoids like CBD, CBG, CNB, and other minor cannabinoids with different or more lax regulations.

Not only could this open up an entirely new niche segment of cannabis retail, but it could allow these products to have a larger presence within traditional cannabis retail—imagine a corner of your store devoted to a luxurious CBD skincare line, or shelves stocked with sweet-smelling lotions and bath bombs. Testers (without active ingredients) could add an all-new interactive aspect for customers.

There is also a big push from natural health associations to delist products with no THC so they could be sold as consumer-packaged goods in mainstream retail. 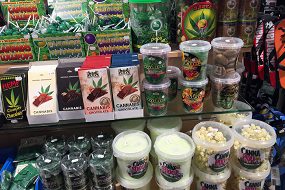 Since the beginning, retailers and licensed producers alike have been lamenting the seemingly harsh marketing and promotions restrictions, which are stricter than other adult industries like alcohol and gambling.

Industry insiders have been hinting that these regulations around marketing, promotions, and even packaging, could see significant change. Industry groups like the National Cannabis Working Group have been advocating to create a harmonization with alcohol.

“We have been advocating really hard to make our rules similar to alcohol,” says Nathan Mison, President of the National Cannabis Working Group. “The simplest way to do that is red tape reduction. If we can do that, we have the capability of advancing the sector by about 10 years.”

This would mean that retailers and producers could market themselves and promote their stores and products much more easily, leading to greater brand recognition, and therefore tougher competition spurring more innovative creations and initiatives. On top of that, changes to these regulations could allow for live events, sponsorships, in-store promotions, loyalty programs, and more.

According to surveys conducted by both Health Canada and the Cannabis Council of Canada, neither consumers nor budtenders easily understand the possession limits for beverages and edibles.

The current possession limit information is conveyed confusingly and is likely impairing compliance.

“No participant possessed knowledge of the 30-gram public possession limit. Rather, this information was misinterpreted as either providing a guide of product strength or as a benchmark for an easier cost comparison to determine the product’s cost per gram,” said C3 in a letter to the government. “That said, the current possession limit information is conveyed confusingly and is likely impairing compliance with the regulation’s intent. This lack of clarity, coupled with the very high equivalency count attached to cannabis beverages, further enhances the risk that one will unwittingly contravene the law.”

These equivalencies and limits have been a thorn in the side of consumers and industry folks alike since Cannabis 2.0 products were released. Even 75% of budtenders surveyed felt that the current system wasn’t sensible, so lobbyists are hoping that this issue will get some attention in the upcoming review. Not only that, but C3 has reasoned that this confusion is leading to customers looking for higher-potency products, which goes against Health Canada’s public health objectives.

The organization believes that this equivalency formula has a serious flaw—but they have a solution. In C3’s model, “one gram of dry flower [is equivalent] to 0.625g in beverages. This would produce a practical equivalency whereby 30 grams of dry flower would be deemed equivalent to (48) units of 355 ml cans of cannabis-infused beverages.”

It may seem like a lot, but in Colorado, 28 grams of dried cannabis is equivalent to 800 mg of THC content in their beverages.

In the same vein, C3 has been advocating for changes to labelling rules as well. According to its Consumer Survey on Cannabis, more than half of respondents said they have never noticed the public possession statement on their purchase.

Other Issues on the Table

Aside from operational issues, folks in the cannabis industry, or those who want to get into the industry, have other hurdles to climb—particularly Black, Brown, and Indigenous entrepreneurs or employees.

There are between 250,000 to 500,000 Canadians with criminal records because of personal cannabis use.

According to Cannabis Amnesty, there are between 250,000 to 500,000 Canadians with criminal records because of personal cannabis use, which can create barriers to accessing employment, housing, and education programs, and it’s an unfortunate fact that people of colour are often the groups that were unfairly targeted by cannabis laws pre-legalization. To eradicate these barriers, many advocacy groups are calling for the expungement of these charges so that marginalized and racialized Canadians can participate in the industry. Advocates are calling for full implementation of the Black Entrepreneurship Cannabis Social Equity Program, as well as encouraging the federal government to continue the progress towards the participation of Indigenous Canadians.

As one of the first countries to legalize recreational cannabis, Canada took a big risk—it may have even gone against a few international rules—but we are seeing the rewards. With retail sales upwards of $300 million each month, cannabis has been a boon for local, provincial, and national economies, but there is still room to grow.

Typically, it takes around 18 months for these reviews to be finalized, but if Health Canada thinks we’ve been good, maybe we’ll get a few of the things on our Christmas list next year.