Health Canada released the summary of the annual Canadian Cannabis Survey for 2022. The survey, which began in 2017, looks at aspects of patterns of use, the cannabis market, and issues of public safety.

The survey results are based on 10,045 respondents ages 16 years and older, with data collection happening between April 4 and June 20, 2022.

27% of those 16 years of age and older reported having used cannabis in the past 12 months, up 2% from the previous cycle, although provincial/territorial estimates range from 18%-41%.

Those who identified as males reported a higher percentage of cannabis use in the past year than females at 30% and 25%, respectively, with this gap closing 2% since the previous year. 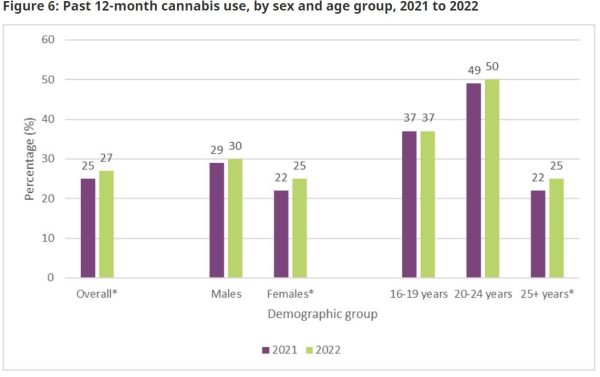 20% of those with a post-graduate degree/diploma have used cannabis in the past 12 months compared to 29% of those who have a high school diploma or less as their highest level of education.

Why People are Using Cannabis

How Canadians Are Using Cannabis

Over half (52%) of those who reported using cannabis over the past 12 months say they use it 3 days per month or less, with 18% using it daily. Daily use is greater among males than females, most notably in the 25+ age group. 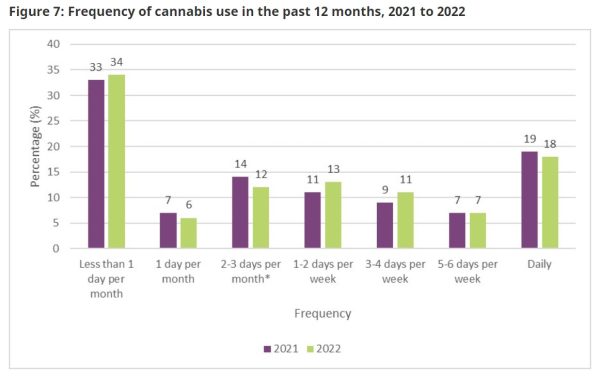 Those who had used cannabis in the past 12 months indicated their preferred method of consumption and could choose more than one method. Smoking was most common (70%), followed by eating it in food (52%), vaporizing from a pen (31%), ingesting cannabis oil (18%), drinking it (16%), vaporizing from a vaporizer (10%), applying to skin (7%), and dabbing (6%). Smoking, using oil, and applying to skin decreased from 2021; using a vape pen increased, while the remaining methods remained unchanged. 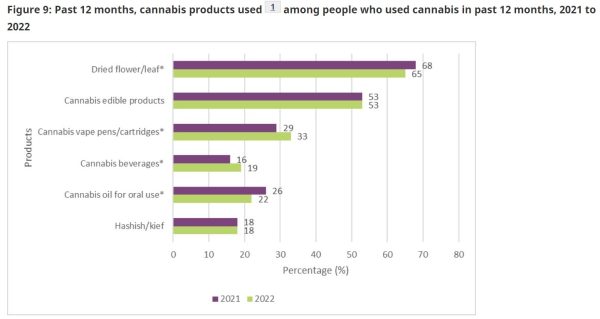 The most commonly used products of 2022 in descending order were dried flower/leaf, cannabis edible products, vape pens/cartridges, beverages, oil for oral use, and hashish/kief and respondents were able to indicate more than one product used over the past 12 months.

While 17% indicated they don’t know the relative levels of THC and CBD in the products they buy, 31% indicated products were higher in THC than CBD, 13% were higher in CBD than THC, 12% were balanced, and 8% chose THC only products.

How Much Did People Pay?

People who used cannabis in the past 12 months indicated that they typically spend close to $65 on cannabis products each month.

Where Canadians are Getting Cannabis 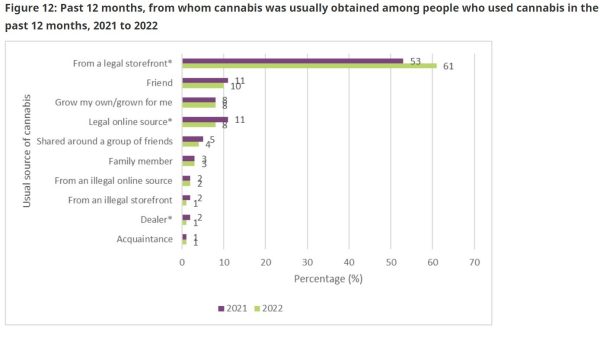 When asked to rank the factors that influence from whom they obtain cannabis, priority rankings were price (30%), safe supply (23%), and quality (12%).

Impact of the Pandemic on Cannabis Use

Considering the 2021 survey was conducted during the pandemic and it is still ongoing, 53% indicated they use the same amount of cannabis than the prior 12 months, with 24% reporting an increase, and 23% reporting a decrease. The increase was primarily among the younger age groups.

Those who reported an increase in use cited stress, anxiety, boredom, loneliness, and lack of a regular schedule as reasons.

The social acceptability of eating or vaping cannabis is on the rise, but smoking cannabis hasn’t become any more or less socially acceptable.